The 241-page complaint names more than 40 defendants, including prescription drug makers such as Purdue Pharma and Teva Pharmaceuticals, and distributors including CVS, Walgreens and retail giant Walmart.

It accuses drug manufacturers of pushing doctors to prescribe the addictive medication while downplaying the side effects. It also alleges that distributors supplied many more opioids than justified for the Nevada market, ignoring data that allowed them to track overprescribing. 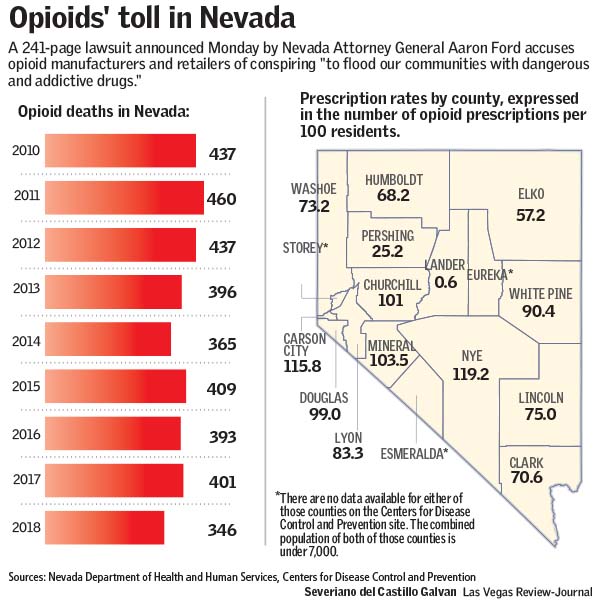 “Page after page of this complaint is filled with examples of these defendants orchestrating a conspiracy — up and down the supply chain — to flood our communities with dangerous and addictive drugs,” Ford said at a news conference in Las Vegas.

He said the companies relied on fake science, fake experts, fake publications and an army of salespeople to push the pills in the name of greed as thousands died in the process.

“But it wasn’t just pill manufacturers in on this conspiracy,” Ford said. “We counted on pharmacies and distributors to aid law enforcement by flagging suspicious orders of controlled substances, as they are required to do by the law.

Instead, they deliberately deceived regulators and law enforcement so that they could keep selling these pills.”

But hospitalizations for opioids continued to rise during that period, jumping 94 percent from 2010 to 2018, according the state.

Nevada’s rural communities typically see the highest rates of opioid abuse yet have fewer resources to combat the problem, according to Nye County Commission Chairman John Koenig. In Nye, Mineral and Churchill counties, the number of opioid prescriptions dispensed outnumbered each county’s population in 2017, according to data from the Centers for Disease Control and Prevention.

“We just don’t have the facilities or the money to take care of it,” Koenig said Monday.

Ford said the state stands to collect tens of millions of dollars from the lawsuit, and any money received would be distributed to cash-strapped counties and municipalities to expand local resources. A formula for that distribution is still being worked on, he said Monday.

Ford hinted that the case could move forward quickly. The attorney general would not give a time frame for the case but said that “we have every intent of pursuing this as expeditiously as possible.”

In a statement, Purdue said that the company “vigorously denies the allegations contained in litigation against the company and will continue to defend itself against these misleading attacks.”

“These sensationalized claims are part of a continuing effort to try these cases in the court of public opinion rather than the justice system, as plaintiffs are unable to connect the conduct alleged to the harm described. Instead, they have invented stunningly overbroad legal theories, which if adopted by courts, will undermine the bedrock legal principle of causation.”

Under former Nevada Attorney General Adam Laxalt, the state in May 2018 filed a lawsuit with similar allegations solely against Purdue Pharma, well-known for its oxycodone prescription OxyContin.

The state dropped that lawsuit this month, according to court records, replacing it Monday with the latest lawsuit, which is much larger in scope. The new lawsuit also names Purdue Pharma as a defendant, as well as members of the Sackler family, which owns the company.

Several municipalities in Nevada, including North Las Vegas, Reno and Clark and Nye counties have filed separate lawsuits against Purdue. The lawsuit filed Monday still stands to benefit them.

Ford’s former law firm, Eglet Adams, was chosen as outside counsel from a pool of nine other firms by a seven-member selection committee to help the state argue the case. Ford recused himself from the selection process.